We’ve driven enough midsize sport sedans over the years to know what we want. Along with a nimble, rear-wheel-drive chassis and a horsepower figure north of the 300 mark, we usually think of something with a German, American, or Italian bloodline. Korean roots? Not so much. But then we spent some quality time with the 2018 Kia Stinger GT. It reset our mentality, so much so that we decided to get one in for a year’s worth of evaluation.

The lean, mean Stinger machine is the culmination of almost a decade’s worth of tantalizing teasing by the automaker. Kia first hinted at a vehicle with true sporting intentions in 2011 with the Kia GT concept, and again in 2014 with the GT4 Stinger concept. Then it finally dropped the real production version at the 2017 Detroit auto show, thanks in part to the contributions of some German imports. 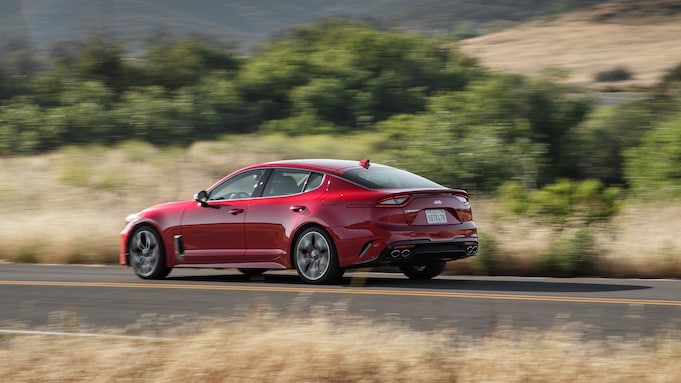 Indeed, the halls of Kia HQ probably smell a bit like brats and spilled hefeweizen these days, as the company lured some top engineering talent away from Germany to help the marque turn up the heat. Chief among them is Hyundai Motor Group head of vehicle testing and high-performance development Albert Biermann, the man who orchestrated the Stinger’s dynamic symphony. Fellow BMW alums Thomas Schemera and Fayez Rahman also play key roles at the group. These people know how to develop a proper sport sedan.

While Biermann’s squad handled the Stinger’s performance and handling, president and chief design officer for Kia Motors Corporation (and fellow German native) Peter Schreyer and his team sculpted the Stinger’s styling. Draped in a shell featuring a coupe-like greenhouse, an aggressive front fascia that advances Kia’s late-model mug, and a functional, integrated liftback, the Stinger deserved a Four Seasons bid on its looks alone. Associate editor Billy Rehbock experienced the pseudo-celebrity treatment behind the wheel of a Stinger GT prior to the arrival of our Four Seasons tester. “I watched heads turn and follow the car as I passed in a parking lot and got loads of remarks from onlookers as I got in or out,” Rehbock wrote. “A guy in a Chrysler 300 nearly pressed his face against his window trying to get a better look.”

Another big part of the Stinger’s appeal is its unique nature, given its liftback versatility and tweener status in both the size and luxury arenas. “A segment straddler, it’s neither a large sedan nor a midsizer, and it’s neither premium nor mainstream in its fit and finish,” senior editor Nelson Ireson said. “It’s somewhere in the center of the overlapping Venn diagram of all of these traits. And while that might mean it’s hard for some people to appreciate, it’s also what makes the Stinger GT so good for so many uses.” 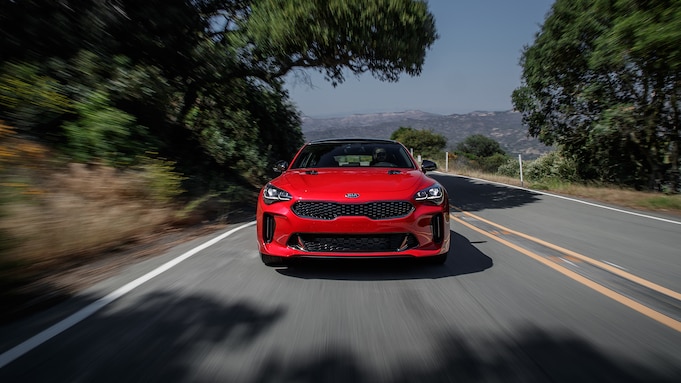 Kia presently offers the Stinger in five trim levels and two powertrain configurations, starting with a base 2.0-liter turbocharged four-cylinder pushing a healthy 255 hp and 260 lb-ft of torque to the rear wheels through an eight-speed automatic transmission of Kia’s own design. All-wheel drive is available for $2,200 and can be had from the bottom to the top of the Stinger range.

Although the turbo-four is a compelling offering, we like a little more pep in our step, so we opted for the Stinger GT. Its eight-speed is mated to a 3.3-liter twin-turbo V-6 that has seen duty in several recent Hyundai Group models. The engine is rated at 365 hp and a healthy 376 lb-ft, enough to hustle our rear-wheel-drive model from 0 to 60 mph in a Kia-claimed 4.7 seconds. We could have opted for the AWD upgrade, but given that our tester will spend the majority of its time within in the state lines of sunny California, AWD seemed like an unnecessary complication. 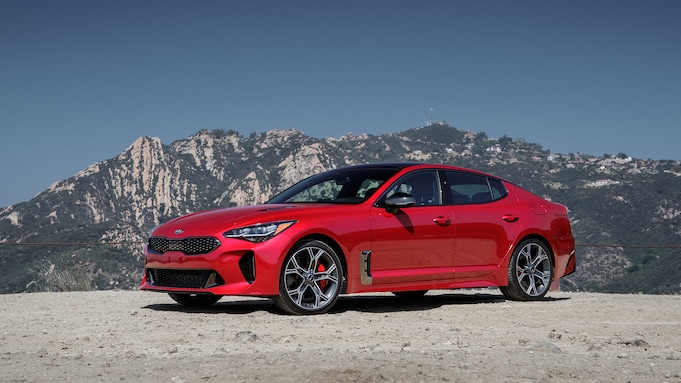 Not all GTs are created equal, however, with the GT1 and GT2 trims sitting above the base GT. Ours is a well-equipped GT2 in HiChroma Red, weighing in at $50,175. Unlike the Germans, there isn’t much à la carte ordering to be had. If you want more features, you’ve got to ascend the trim hierarchy. Since the GT2 is the top trim in the Stinger heap, it comes fully loaded; the only option on our car is a $75 rear bumper applique. It’s a comprehensive package that’s a requirement when you start pushing up into this price bracket.

Performance wise, the GT2 comes with a limited-slip differential and electronically adjustable suspension, along with 19-inch wheels with a set of Michelin Pilot Sport 4s (225/40R19 front, 255/35R19 rear) wrapped around them. A Brembo brake package slows things down. Strangely, the electronic shift-by-wire system is exclusive to the GT2 trim. As far as we can tell, it doesn’t do anything differently than the regular shifter except clean up the interior aesthetics a bit, as the T-handle unit on lower-line Stingers is balky at best.

In addition to the fancy e-shifter, there are myriad infotainment and comfort features, including an 8.0-inch touchscreen with voice command and navigation and a 15-speaker Harman/Kardon sound system. Our Stinger also features Nappa leather trim and power 16-way adjustable driver and 12-way adjustable passenger seats. They’re heated too, as is the power-adjustable steering wheel. 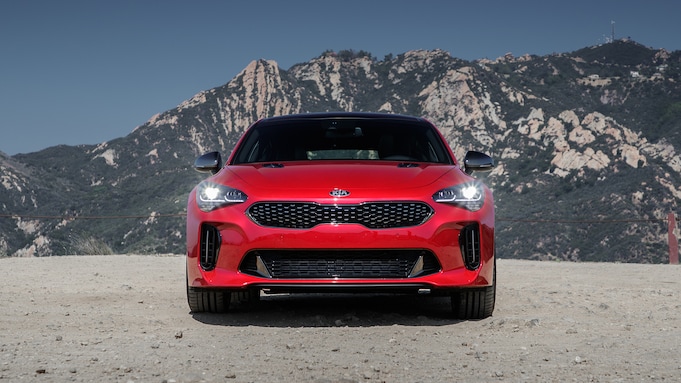 A full range of nannies and other convenience features are in the mix as well, including radar cruise control, blind-spot monitoring, forward-collision warning and avoidance, lane departure, lane-keep assist, rear cross-traffic alert, and automatic high-beams. Oh, and don’t forget the rain-sensing wipers (not that we need them much out here in Los Angeles). The GT2 also gets a trim-exclusive head-up display.

Listening to Automobile editors who have already had an early go in the car, we anticipate a fun and (very) fast 12 months. Although the Stinger didn’t quite make the top step of the podium, it was widely praised at last year’s All-Stars event for its dynamic capabilities and potent powertrain, and those who have gotten extended seat time in the car have praised it. “After logging several hundred miles on the odometer, I came to appreciate the Stinger as a capable sport sedan with proper touring car clout,” Rehbock said of his extended drive. “It’s fast. Really fast. Hitting freeway speeds is no problem, and our tester was all too eager to get up to speed.”

We’re eager to find out if this is the start of something truly magical for Kia, or just a bulgogi-flavored flash in the pan. But based on our time so far with the 2018 Kia Stinger GT—including the first stints in our Four Seasons car—we’re expecting to snap more necks, field more questions, and get chased down over the next year by a public curious to know what this quick Korean sport sedan is all about.