autoblog | Alex Kierstein | 06/19/2018
Jaguar is eager to promote its Ingenium turbocharged inline-four as a legitimate object of performance desire, and what better way to do so than drop it into its most desirous car? The 2018 Jaguar F-Type Coupe to this point has featured six- and eight-cylinder engines, all supercharged, but this is the first time that the other type of forced induction has made its way under the F-Type’s long, sculpted hood. 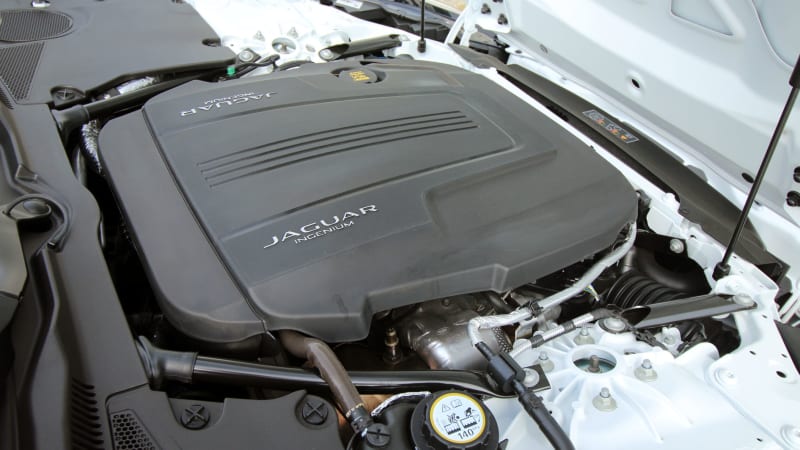 The 2.0-liter is also a lot cheaper – $8,100 less than a bare-bones V6. That’ll probably make the decision for a lot of folks, dropping the base F-Type into a whole ‘nother class of sporty two-seaters.

I’ll posit, however, that the F-Type isn’t a raw numbers car. It’s a passionate thing that appeals to an emotional part of our brain. Just look at it! The coupe we tested, in Fuji White, was fresh as a mountain stream despite the platform’s age. The sheetmetal is, quite simply, most of the appeal. Even the base wheels, 18-inch, 10-spoke alloys, look phenomenal. And since the F-Type 2.0 is sexy, undeniably quick enough to back up its sporting looks, and a significant price savings over a V6, it’s almost a killer app.

If only the little Ingenium turbo-four was as passionate as the F-Type itself. It’s a workaday unit, coarse and gruff. After all, it sees duty in just about everything else Jaguar-Land Rover makes, from the lowly Discovery Sport to the big XJ. Its clattery four-cylinder noises and thrashiness don’t jibe with the premium sports-touring vibe the rest of the car exudes. We’ve gotten used to, if not come to universally love, four-cylinder pony cars like the Mustang and Camaro, but the divergence in character between car and powerplant here is vast. It does the job, sure, but you enjoy the F-Type in spite of its engine, rather than because of it. 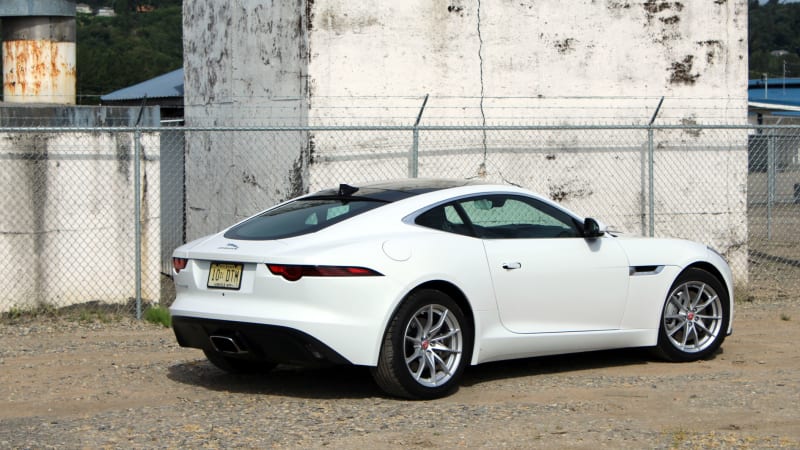 Low-speed tractability issues don’t help things any, whether the engine’s charms are important to you or not. An odd combination of boost, driveline shunt, or transmission confusion make low-speed maneuvering jerky, regardless of drive mode. Putz around a mall parking lot or sit in traffic for a few minutes, and it’ll be clear what I’m on about.

And the slower you go, the more likely you are to look closely at the car’s interior. There are new seats: thinner, very comfortable, more space-efficient, and nice looking. They quite fairly deserve praise. The interior design does not, as it’s starting to look its age. It was always a little cheap-looking for its class (a family trait as Contributing Editor James Riswick noted recently in his review of the XF Sportbrake), but it also managed a quirky charm. Now it is starting to stand out, a low-rent interior housed in a conspicuously upscale body — and this is where owners spend most of their time. The F-Type really deserves an interior befitting its phenomenal exterior lines. 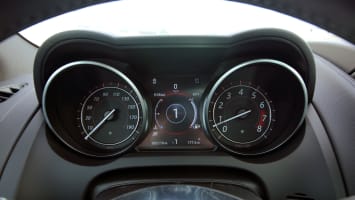 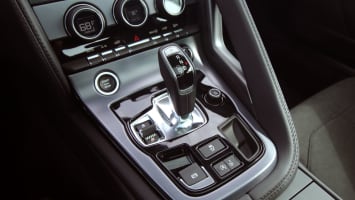 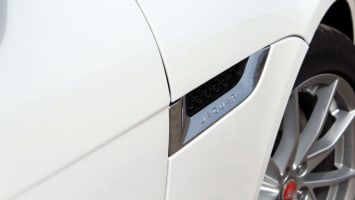 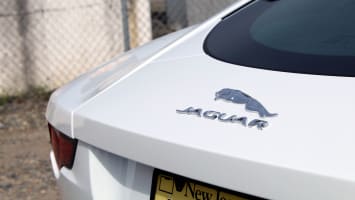 The F-Type gets better as velocities increase, but not before a distinct pause as boost builds. If turbo lag is the bane of your existence, the supercharged F-Types don’t offer a drop of it, and you’ll want to steer around the 2.0-liter model. On the other hand, some automakers go to great lengths to make their turbo engines feel naturally aspirated, with mixed results. The lag in the 2.0-liter F-Type is at least honest, a reminder that there’s some sophisticated plumbing and a little turbine spinning at stratospheric RPM. Drop-kick the accelerator, and there’s a bit of a pause and then a nice, fat surge of boost comes on — dramatically, but without violence. The turbine whoosh and whistle is one of the more pleasing aspects to the powertrain — as is the restrained cough that comes through the large single exhaust tip on liftoff in some situations. If you’re outside the car, the exhaust growls, but from inside, the soundtrack is anonymous, generically sporty, but overall too subdued.

The ZF automatic transmission’s eight ratios are packed tightly together. It snaps off shifts quickly enough to keep the engine churning away through the meat of its short powerband, but even in manual mode it’ll second-guess the driver sometimes and command a shift, a patronizing annoyance. If you’re telling the car that you’d like to shift it yourself, it should leave you to your business unless you’re in danger of hurting it. 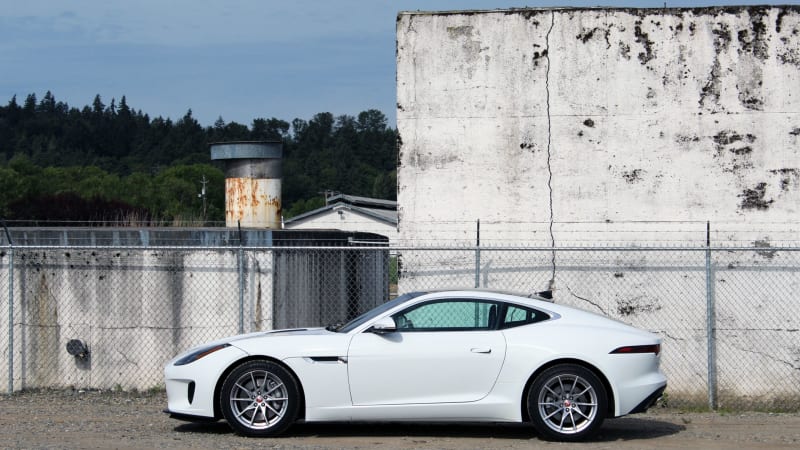 Keep the tach north of 4,000 rpm, and the engine’s rough edges matter less as you start to enjoy the handling more. The lighter 2.0-liter coupe feels pointier than the last V6 model I drove, and the steering feel is excellent. Get into a rhythm in a windy section of road, and the F-Type’s handling is engaging enough to let the engine recede into the background. To repeat an earlier point, you’re enjoying the F-Type despite the engine, rather than because of it.

I’m of two minds about the Ingenium’s suitability for the F-Type. As an enthusiast with all the particular notions about how sportscars should comport themselves, I don’t love this F-Type like I love its brawnier, snarlier siblings. Jaguar built its reputation on powerful, lusty-sounding inline-sixes – the beating hearts of the company’s successful, and classically beautiful, road and race machines. Without going retro, the F-Type is the modern embodiment of Jaguar’s spirit – and while the Ingenium does the job, it doesn’t have soul. 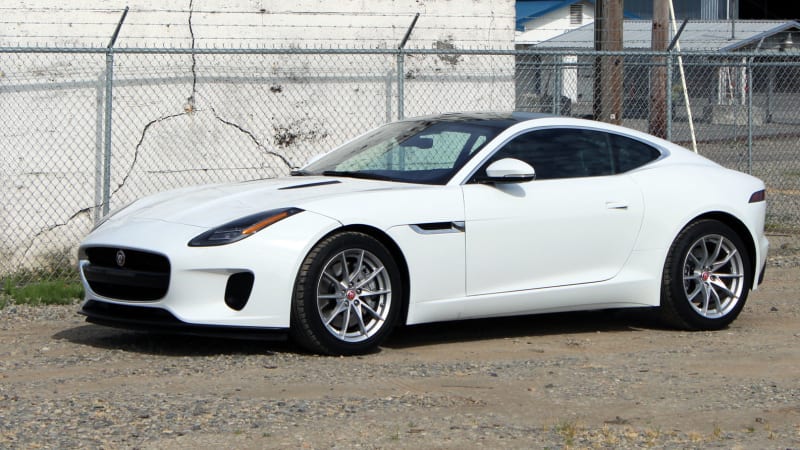 But, other than the ovoid bazooka exhaust, this version doesn’t alter the F-Type’s sexy lines. At a starting price of $60,895, it’s considerably more affordable than other F-Types, and more efficient – all of which will attract an entirely new buyer into many Jaguar showrooms. The un-sexy engine doesn’t change the fact that this is the kind of car you park and look back at, over your shoulder, until it’s out of sight. If that’s your yardstick, it’s hard to beat the value proposition the Ingenium-powered F-Type offers.